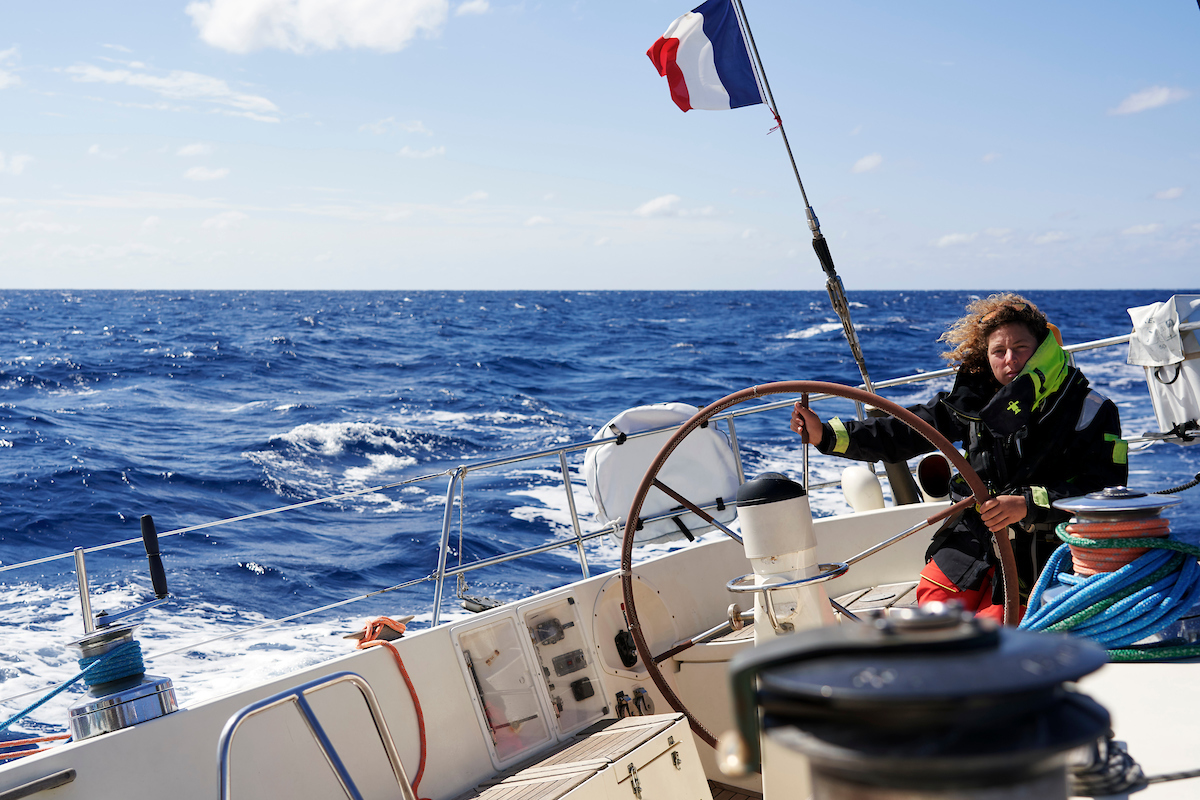 Autopilots must now control foiling yachts that are difficult to steer by hand. Crews hang on for the body-bruising ride. 50 years ago at the start of the first Whitbread race around the world, wet washing hung in the rigging and hearty crew dinners, sitting at a table with a glass of wine was the order of the day. Family members and friends took pride in hand steering their yachts through storms and tempest, or frustrating doldrums. Steering is what you did. It is the image of the sailor. It is the brand of sailing?

Autopilots are the realm of solo sailors. Today it is impossible for a human to fly sophisticated military jets without computer assistance. Sailing is entering that new era. Humans cannot steer the latest, sophisticated, fully crewed foiling yachts around the world. Helmsmen are no longer required. That is exciting in itself and we are all eager spectators! It promises to deliver stunning speeds and epic live videos from enclosed cockpits akin to starship “Enterprise” flying the universe.

The 2023 Ocean Globe Race is celebrating the 50th Anniversary of that first 1973 Whitbread race. It is now the only around the world crewed race, via the Southern Ocean that has a place for humans steering. Sailors will also interpret their own weather without computers, or satellites and navigate by sextants on paper charts. Yes it will be slower, but that just means more stories and more fun! There is a certain serenity and sense of purpose listening to cassette tape music as you sit down for dinner with a glass of wine while racing in the Southern Ocean!

With eight months to the start of the 2023 Ocean Globe Race, several Whitbread veterans are back into IRC transatlantic racing

While many Ocean Globe entrants are still in the shed this winter, some teams are already partaking in iconic transatlantic racing. Marco Trombetti, owner of Translated 9 left Cape Town on January 2nd for his first transatlantic. Meanwhile, Lionel Régnier on L’Esprit d’Équipe and Marie Tabarly on Pen Duick VI are in Lanzarote, ready for the start of the RORC Transatlantic Race on January the 8th for their Carribean adventure!

In the southern Atlantic, Translated 9 is participating in their first big race in the fleet of the 50th Cape to Rio which started on 2nd January. They are making quite an impression : 4th for Line Honours and 2nd IRC in a mixed fleet of 16 yachts!

The Swan 65 finished the 77-78 Whitbread in 5th place overall as ADC Accutrac in the hands of Clare Francis, the first woman to lead a crew in an ocean race. She sailed from Italy having completed an extensive refit, heading to Cape Town with a mixed crew of professional and amateur sailors.

The amateur crew have been selected from 1200 applicants by VOR and America’s Cup supremo Paul Cayard and are mentored by Italian offshore racing dynasty Vittorio and Nico Malingri. Together they are preparing for the adventure of a lifetime: racing around the world the retro way on their iconic Swan 65.

Translated CEO, Ocean Globe Race co-skipper and shipowner Marco Trombetti is also on board for the Race and delighted with the Team’s progress so far having recovered from a bout of sea sickness in the first few days.

There is no better challenge for a crew with grand ambitions than testing ourselves in the legendary Cape 2 Rio Race. Measuring our abilities in a great regatta like this one will help us see where in our preparation we are, what our limits are and, crucially, how to push ourselves even further.

Meanwhile two other OGR boats who have sailed the Whitbread, but not at the same time, nor in the same configuration. Pen Duick VI entered the first edition with Eric Tabarly but dismasted twice. In the 1981-82 edition she was called Euromarché and raced against 33 Export, later deeply optimised and finally victorious in 1985 with Lionel Péan as l’Esprit d’Equipe and one last time again in the 1989 whitbread as L’Esprit de Liberté.

Both boats raced each other last year, notably in the Round Ireland Race and the Dhream Cup, before going back into refit, ready for a heavy 2023 programme. After the RORC Transatlantic which set out from the Canary Islands on January 8, they will enter the RORC Caribbean 600, a winter classic in February, where Lionel Régner will be joined by the 1989 Whitbread winner Lionel Péan on board and Frédéric Leclère from the original team. After their Caribbean gig, the Team l ’Esprit d’Equipe is planning to sail to New York with Pen Duick VI which hasn’t returned there since Eric Tabarly’s victory in the 1976 OSTAR, before crossing back to France in spring.

We dismantled everything, checked everything, changed what needed to be changed. The hull, the standing rigging and the interior were redone. The aluminium structure was inspected and cleaned up. All of this was done in the best possible balance between time, budget and performance. The whole team is very motivated! We are still missing our new sails, so we will have some room for improvement in the future, but we clearly have a card to play in the Ocean Globe Race!

L’Esprit d’Equipe had an extensive rebuild last year and the skipper Lionel Régnier is an experienced skipper having won the OSTAR and participating in the Route du Rhum in Class 40. He is also a knowledgeable préparateur, having prepared the winning boat of the retro Golden Globe Race 2018, for Jean-Luc Van den Heede.

There is a tremendous amount of expertise in Vendée due to the numerous races leaving from Les Sables d’Olonne, such as the GGR, the Mini transat, and of course the Vendée Globe. It enabled us to get the boat in great shape for our second transatlantic on L’Esprit d’Equipe. We have 9 of our 13 OGR 2023 crew onboard and are looking forward to racing with the best in the fleet.

The 3000-mile Transatlantic from Lanzarote to Grenada is a fixture in the race calendar and gathers 20 boats, half of them French, including six Maxis and three of the fastest ocean going multihulls is perfect to test the OGR boats, systems and crews on a long distance and see how they will fare in IRC.

The victories of Pen Duick VI in the Dhream Cup in the “Big Boat” category and Round Britain in IRC1 has already given an idea on how those boats can perform under IRC in a variety of conditions, while more IRC results are available for the production boats in OGR Adventure and Sayula Class.

The Ocean Globe Race has a vast array of yachts from 46 to 73 feet. The boats compete in three distinct classes, Adventure, Sayula,and Flyer, both for line honours and in corrected time under the IRC rating. The original 1973 Whitbread ran under the old IOR handicapping system and while overall line honours and class winners are of note, for sailors following the adventure, most will be watching the IRC overall handicap leader board on the tracker.