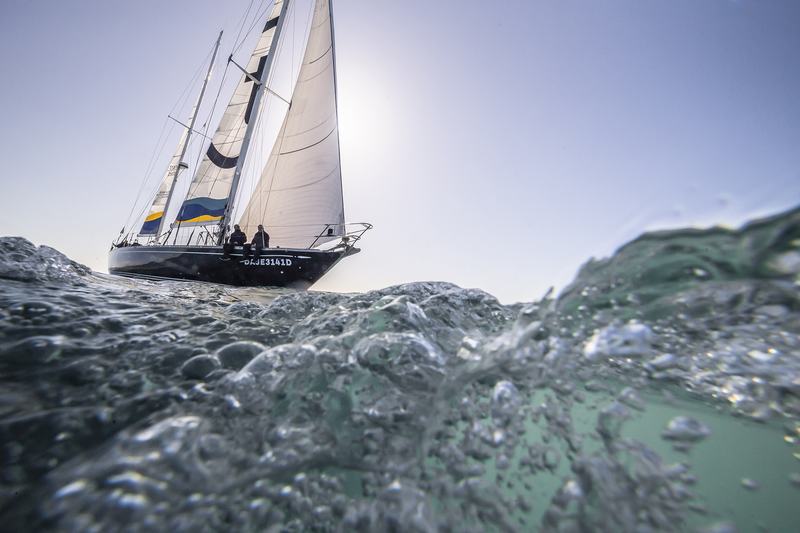 It was in 1981 that 29 entrants set out on the third edition of the Whitbread Around the World Race, creating the current record as the biggest ever, fully crewed challenge.

As the race evolved every four years, it became ever more professional and eventually, as the Volvo Race for elite sailors, the numbers dropped dramatically, averaging in the past 20 years, to only 7 starters.

The 2023 Ocean Globe Race (OGR) will celebrate the 50th anniversary of the original 1973 Whitbread, the first ever fully crewed race, around the world. Already, two and a half years from the start, 25 entrants are paid up and another three have committed, meaning we have 17 different countries represented. The clear expectation is, that a full fleet of 34 yachts, sailed by professional and amateur, mixed gender crews, will cross the start line on 10 September 2023. If so, the OGR is set to become the largest ever, crewed, round-the-world race!

Starting in Europe, the four Leg, 28,000-mile race around the globe, via the three Capes, will stop over in South Africa, Australia and South America, before sailing back to Europe in late April 2024. Negotiations continue with various potential Host Ports, all currently affected by Covid issues, yet retaining strong interest and great passion, for a back-to-basics human event, rich in stories that local communities relate to. The expectation is for the final course to be announced no later than the third Quarter of 2021.

The excitement and enthusiasm for the Ocean Globe Race from the sailors that know about it, has been extraordinary. When COVID first appeared in February 2020, we decided to stop all promotion of the race, as the World faced serious challenges. But entries kept coming! Now we are recommencing promotions and available places are filling fast. We had to close ADVENTURE CLASS permanently but entries are still available in the remaining three classes.

The OGR steps back in time to the 1970s as a Retro Race, with two classes sailing production yachts designed before 1988 (Adventure Class 47-55ft and Sayula Class 56-65ft) and a third Flyer Class, sailing previous Whitbread entrants from the first three editions of the original races.

Retro Classes must navigate by sextant, use no modern high-tech equipment, or computers and have only cassette tapes for music.  A fourth Classic Challenge Modern Class, sailing Whitbread Maxis and Whitbread/Volvo 60s will use the same start finish ports, but race a longer course than the slower Retro Classes for a special ‘BIG RED’ Trophy, in honour of the late Sir Peter Blake. The combined fleet covers the entire history of the Whitbread Race.

I signed the contract on Second Wind, Swan 651 last week – so yes, the boat is bought.

Early editions of the Whitbread saw French entries dominate, filling over 33% of the fleets. Eric Tabarly sailed the controversial PEN DUICK VI in the first 1973 edition and subsequently entered many later editions.

Arnaud Lizop sailed with Marc Cviklinski onboard PEN DUICK III in 1973, as a fresh-faced 20-year-old crewman. He returns in the 2023 OGR as one of FIVE French entries (again the largest competing nation) to skipper his classic Nautor’s Swan 55 Nakamal,reliving his adventure into the unknown of 50 years ago.

I am excited to join the 50th anniversary celebration of my original Whitbread experience. The OGR is a unique opportunity to promote values in which I believe such as LONG TERM. The Classic yachts and long distance of the OGR reflect this. Our mixed gender team will also reflect diversity of origins and age.

Another Whitbread veteran in the OGR (also sailing a Nautor’s Swan 55, Galiana) is 63 year old Finnish sailor, Tapio Lehtinen. He was watch leader onboard Skopbank Finland in 1981. In 2018 he entered the Golden Globe Race, returning to the Southern Ocean he loves and was the last of only five finishers. He has entered the 2022 Golden Globe Race again, so will have just weeks to recover from that solo circumnavigation, before setting off for his fourth circumnavigation in the 2023 OGR. Tapio has been testing 60 young Finnish sailors over the past year and now has 18 in the running to be part of his final race crew.

Since sailing the 1981-82 Whitbread Race as a 23-year-old university student, I have woken up countless times during the following decades, having dreamed of doing the Whitbread again. When Don revealed to me that he was going to give a rebirth to the race in 2023, I knew instantly that it’s my dream come true. As much as I enjoy shorthanded and single-handed sailing, doing the OGR gives me an opportunity to enjoy sailing a big boat, with a young crew, passing the heritage of Finnish ocean sailing to a new generation of sailors – I am as excited and enthusiastic as the young student some 40 years ago, again!

Early Whitbread crews and yachts are spread throughout this OGR. The only French yacht ever to win a Whitbread in 1985, L’Espirit d’Epuipe (ex 33 Export and Espirit de Liberte) skippered by Lionel Pean will be sailed by a tough group of sailors from Les Sables d’Olonne France, skippered by Lionel Regnier.

We have a great yacht and are excited coming back to the origins of offshore racing that promotes human values. Our mixed age and gender crew lets the oldest pass knowledge and experience to the youngest and the youngest bring fresh ideas, thinking and performance to the campaign. The OGR, like no other challenge, is life defining. We must and will surpass ourselves individually and collectively, to reach the summits of this incredible challenge!

Two giant Maxis are preparing to enter the Classic Challenge and at the opposite end, the smallest yacht ever to race the Whitbread is currently under refit with big plans for the OGR! The French 46ft Mor Bihan was skippered by Philip Poupon/Riguie in the 1981 Whitbread. She hopes to sail again in 2023 under the French Flag and a strong crew from Brittany.

For the first time ordinary sailors can race around the world.

All details including the Pre-Notice of Race and entry applications are available at www.oceangloberace.com